Back on line now as we had no internet at Tandragee, and to be honest I didn't stop the whole weekend.

Many thanks for all your comments and well wishes. Mark, don't make comments that may come back and haunt you, but it's a deal.

With heavy hearts we left everyone at Carmean Road and set off for Tandragee. We popped into Draperstown to say hi to Owen at Slim's cafe, but sadly we missed him.

We'd been told that the paddock was already a swamp on Wednesday so we took the van up to the paddock on Thursday evening.

We were greeted by a tractor towing people into the paddock, and it was so muddy. I had nightmares about what it would be like by the time we came to leave on Saturday.

We got set up and Hazel, our host for the weekend, picked us up and took us to a great pub in Tandragee.

After breakfast on Friday Hazel lent us her car so I could do a couple of laps.

What a circuit. It's called the mini TT due to the variety of corners, and it certainly lives up to its name.

There is one right hand corner that has a 30 foot high bank opposite. At the top are fence posts, which have bales on to protect you. I was later told that riders have gone up this bank and cleared the fence at the top, one to watch then.

After getting the bikes checked it was off for a very informative lap in the newcomers bus. We had three top riders giving us a guided tour of the circuit, pointing out apex's breaking points etc. This was a very worthwhile trip and lots stuck with me.

The weather again wasn't on our side for practice so it was another round of guess the tyre, not a great way to learn a circuit.

Like all road circuits, the circuit itself doesn't care if you are a pro rider or a newcomer, it will bite anyone who makes a mistake, and unlike short circuits the bite will always be a painful one.

I did scare myself on the first left hand corner as it tightens up, so ended up laid over with brakes still on heading for a bank. Luckily I remembered the old saying of look where you want to go, not what you're going to hit, and managed to get round ok. I was later told that if you are going to crash on a corner, it's not a bad one to crash on as you just end up in a field.

After a few laps I was lucky to follow Yvonne from ZXR forum, and I could see from her lines how to link the corners, which was a great help, so thanks for that.

By the end of practice I started to build confidence, so much so that I went for an overtake at the last corner.

On the newcomers coach we'd been told to watch this corner as it sucks you in and is easy to miss the breaking point, if you are not careful.

Just to prove the point I out braked Wee Roy, and overshot the corner. Luckily the escape road leads down to the paddock, so I made it look like I meant to do it. Still must've given Roy a smile as I'm sure he knew what would happen before I did.

We packed up late, in the dark, and was helped by my 'fan club' of Jack, Josh, Kyra and Adrian who'd come down to watch practice and then came along for race day too.

I also saw Ian, a marshal, who I'd met on Isle Of Man a couple of times last year, and I gave him a wave as I went passed him during practice. Being a flag marshal he has to sit with his back to the racers and look down the circuit. Next lap I came round and he obviously knew when I'd be coming, as he sat there with his back to me and gave me a thumbs up, which made me smile.

So to race day.

It was another early start but the weather looked to be on our side, so it was another round of change the tyre.

Last week it was tyre warmers all round but this week everyone was wrapping their tyres in cling film to stop the tread getting clogged up with mud on the way to the holding area. It was so muddy in the paddock that some of the top names refused to come to scrutineering as it was too muddy for them, so they had mats laid down so their bikes didn't get muddy. 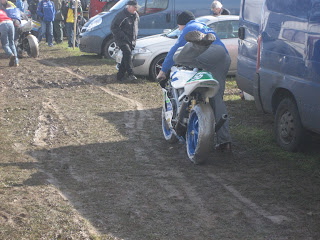 Aficionados amongst you,James, may think this is WW1 battlefield, sadly it's the paddock. Sadly this wasn't the worst of it, in some places it was up to your knees.

First race was on 400 and I was really nervous about the race as I still felt I didn't know where I was going.

Luckily my fears were in vain as the circuit felt so much better on Saturday and it all seemed to come together. I had a good dice with a chap on a 650 and this boosted my confidence as well.

There are a couple of crests on the circuit and hadn't really noticed them in practice, but come the races I was airborne on every lap on both the 400 & 600.

The 600 is geared for about 160mph and on a couple of occasions I was flat out in top, and still went for another gear, so will fiddle with gearing should I go back next year.

Sadly in the second 400 race my bike died and came to a halt.

I was out in the next race so the marshals flagged down a travelling marshal to give me a lift back to the pits, where I jumped straight onto my 600.

By this time I grown to love the circuit and had a great run round and hope to be back next year.

I shouldn't be too despondent about the event as everyone I spoke to said it takes 3 years before you can really start pushing. That and my lap times improved throughout the weekend.

I'm back home now and on top of having to sort the 400 out I have to wash everything as I think I must've bought a fair size chunk of Ireland back home with me as everything is covered in mud.

Oh well I've got 6 weeks between now and Cork and I'd only be bored otherwise.

Whilst at Tandragee I saw Susan who runs Skerries and she confirmed my entry for the racing which is great news.

My plan this year was to do as many races as I can and then next year, all being well, go back and do selected ones. Well so far I want to go back and do both Cookstown and Tandragee again. At this rate next year could be an expensive one too!