Well after much research and scouring various web sites I've come to the conclusion that I will be racing a Suzuki SV650 in the Supertwins and Junior Support Classes next year.

So let me introduce you to my steed, oh I did mention I'd bought one didn't I? 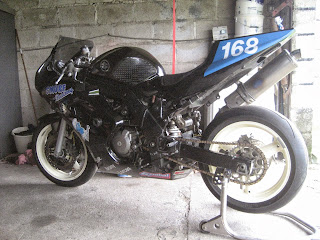 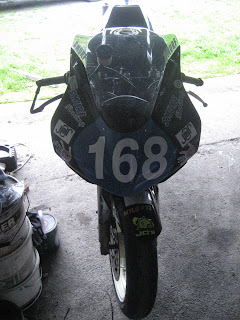 Some of you may recognise this as Smurf Racings SV. Noel is moving up to 600's so decided to sell his supertwin to finance the move.

She's a 2006 model with uprated suspension front and rear. A Power Commander sorts the fuelling and an M4 exhaust takes care of getting rid of the gases. This together with some tuning means she's putting out about 84hp, which is plenty for me to be getting on with. There are lots of other modifications so only really a case of giving her a good clean and hopefully a lick of paint.

She also comes with spare wheels and all the sprockets needed for the Irish road circuits which is good to have.

I decided on a Suzuki over a Kawasaki, mainly due to price. I spoke with a tuner, who tunes both SV's and ER's and he said that there is not much to choose from in either. Colin reckons that if you sepnt £5k on building an SV, to build a similar spec ER would cost you £8k, this was apparent when talking to guys with ER's for sale.  To top it all he races an SV and had the second fastest lap at last years Manx Grand prix and came 4th in the race, so he knows what he's talking about.

Over the next few weeks I hope to get some better pictures and have a closer look at her, I've got to collect her yet, so don't hold your breath, but I will post some updates as they happen.

As whenever I buy a bike I start looking on 'The Bay' for any cheap spares. I found a Domino quick action throttle which was cheap and also two clip ons (handle bars) for 99p each, so the spares have started.

Anyway as soon as I can I will post up some more pictures and let you know how I'm getting on.

Well, that’s the season over and it has flown by, I can’t believe it was six months ago, April, that I did my first race of the year.

Many years ago I read about the Irish road race season and how you could basically race every weekend with racers driving from one meeting to the next during the week, then racing again at the weekend.

Sadly there are far fewer meetings in a year than there used to be, but it was still my dream to do a full season, so after many years of pondering whether to do it, I made my mind up that this was going to be that year.

My ambitions for the year were to finish and enjoy it,  I did both of those, so everything else was a bonus.

I have to say that I thoroughly enjoyed the racing, despite not setting the world alight with my finishing positions, but then again I was told on many occasions, that it takes three years at a circuit before you can start pushing. Obviously some can but they are few and far between, and signed by big teams.

I went at this as a professional amateur, as in I like my bikes and set up to look professional but funded entirely from my own pocket, and just out to enjoy myself.

Throughout the year I’ve met some fantastic people and had some great races so it was worth all the money and hours driving up and down the M6 to the ferries. I’ll miss stopping at Warwick Services on what seemed to be a weekly basis, so much so we stopped on the way back from Scarborough just for old times sake.

So apart from making a huge contribution to Opec by buying more than my fair share of diesel, what have I achieved?

Well the two main points, finished safe and enjoy it.

I’ve met loads of great people and it was sad to leave the paddock at Killalane saying goodbye to friends who I will next see in April next year, all being well.

It really is like a travelling circus, seeing the same people at all the races. None more so than when I left Belfast for Isle Of Man for The Southern 100. It was as if the entire paddock from Skerries had moved to Belfast to catch the ferry.

What else did I accomplish? Well my lap times improved throughout each meeting and was 2 seconds a lap faster around The Southern 100 course than I’d ever been so that was a huge moment for me. Sadly the lap times at Killalane didn’t improve from last year,  but that’s just racing.

I was also pleased to see that on the 400 I finished 17th in the 400 Championship, out of over 30 riders. This was especially good as through weather and mechanical problems I missed 4 rounds, so I basically raced half the season, so to finish in the top 20 in my first attempt was a great confidence boost.

Now, my plan at the beginning of the year was to do a full season for a year and then I could say that I’d done this. My goals changed to, just go back and race at the circuits that I enjoyed.

Well that basically means all of them.

Realistically this won’t be possible as it has cost me a huge amount of money, luckily I have six months to pay it all off just in time for the new season to start.

I’ve have been offered a bike to race next year at one event, so if this happens this will dictate what else I can do next year, I’ll keep you posted as to what happens.

I’ve also had the offer of leaving my van and bikes in Northern Ireland. This will of course save on ferry costs and also time off work, which is a huge help.

So if I had to choose which circuits I’d go back to? Well if I can do them all here are my favourites:

I really enjoyed Cork, however it was an awful lot of driving and money for a weekend, whereas the others are close to one another so only one ferry for two races, although Killalane is on it’s own it’s only 30 minutes away from Dublin, and I really enjoy the circuit.

Walderstown was ok but not a brilliant circuit and being on the end of Skerries and The Southern it was a long week so didn’t give it my best.

Saying that if the offer of a bike comes to fruition and I keep the van over in Northern Ireland, this may change.

So that was my dream year of Irish racing and it was great and would happily do it again. I’m pleased I’ve done it and could kick myself for not doing it sooner, still I did finally do it.

There are so many people who I have met and have helped, it would take another blog just to thank them all.

But my special thanks goes to all the organisers of the meetings, the spectators and the racers who I’ve met and helped me. John, Stafford and James for helping me out. But outmost thanks goes to Kyra, Ann, Sandra, Adrian, Jack, Joshua, Gordy, John and Nanni for looking after us so well and making us feel so welcome when we've visited.

When I say us I mean me and Steve, who without I wouldn’t have been able to do half of this.

Steve really has been a star. He’s helped with booking travel arrangements, looking after the bikes, cheering me up when I need it and keeping everything in perspective. I really can’t thank him enough for everything he’s done for me this year, I truly wouldn’t have been able to do it without him.

Hopefully this is not the last you'll see on my Blog as throughout the Winter I plan to build a Supertwin which I will race next year. I'm not sure if it will replace the 400 or the 600, I will have to wait to see what classes are running next year before I decide on which to replace. So hopefully I will chart the build progress of my new bike, which maybe a complete road to race bike conversion, or just a strip and check of a ready built race bike.

But until then many thanks for reading and hope you've enjoyed it.