Well I've kept the post office busy this week, and yesterday it all turned up.

Firstly two sets of tyre warmers, followed by my refurbished shock and then my caliper spacers.

The first two are self explanatory but the caliper spacers were something I saw on ZXR owners club forum.

They allow you to fit brake calipers from a GSXR onto the 400. This will give better, feel more bite and are also lighter.

So now I have the spacers I'm after a set of new calipers.

These won't be fitted before the track day, mainly as all the presents I've listed above I bought for myself, so the calipers will have to wait a bit.

So off to the garage now to fit my freshly serviced shock back in.

Got home today to see my entry has been accepted for this years Southern 100 meeting, which is great news.

Some of you may know that it's called 'The Friendly Races'. Well it most certainly is that.

It's the only race meeting I know where the riders get free tea and coffee, now you can see why Guy Martin raves about it.

The only downside is that there is no PA in the paddock and everything runs to set times. Except if they change the times for any reasons, weather, incidents etc.

This led on one occasion to my pit crew at the time, Steve having to come and find me, shall we say mid pre race ritual? Why do nerves effect your bladder so?Anyway I just got to the bike and the paddock controller told race control that I was just on my way to the holding area, when in fact I hadn't even got my crash helmet on.

'Don't worry, they'll wait for you' he told me. Luckily they did but it was still the quickest warm up lap I've ever done.

I've also decided that as Kells has been cancelled I'm now going to do Cork on 16th June, so my entry will be in the post this week for that one.

Fortunately the private test track I use was open this morning so took the bike for a quick spin, and she went a treat.

Pulls really nicely and changes gear with no problems, stops as well which is handy.

I've now laid a piece of wood underneath her to make sure there are no leaks, so fingers crossed and all that.

Well after the set back earlier in the week things have progressed nicely.

I traced the starting problem to a bad earth, once fixed she turns over no problems.

The newly cleaned carbs seem to work fine with no leaks, they just need balancing now.

Bike starts fine, ticks over nicely and sounds sweet, just like she always does.

Now the shock is going for a service I spent last evening stripping, cleaning and regreasing the shock linkage. This was another of those jobs that I've always put off, but as the shock was out seemed rude not to.

Have to say all the bearings are still good and are smooth as silk now they've been cleaned up, so those Irish roads should feel billard table smooth now.

I hope over the weekend to balance the carbs and also stick a road shock in the bike just so she is not hanging form the roof joists.

With a shock in there I can also take her for a run to make sure gear box is ok after the rebuild.

This will of course be done on a closed road with a professional rider.

With Kells being cancelled I am now considering racing at Cork 15th & 16th June. I say considering, I've just printed the entry form out so its pretty much definite.

Talking of Irish clubs, I'd like to thank Norman at Cookstown club for his help with booking my accommodation for both Cookstown and Tandragee. By doing this for me saved a huge headache, so thank you and look forward to seeing you soon.

Cheers
Stuart
Posted by Unknown at 17:58 No comments:

One Of Them Days.

Well I got up with best intentions today and headed straight to the garage.

Over the last few days I've had the bike running, but not as sweet as it usually is.

After checking electrics etc I then swapped the carbs from the engine I took out, and it ran like a dream.

Apart that is, from the fact the petrol was coming out of one of the overflows.

I took the carbs I'd taken off and cleaned them all up again so wanted to see if they worked ok.

I wanted to get the bike running and then change the carbs over.

Whilst working on the bike I noticed smoke rising from the back of the bike.

Not good news I thought, or words to that effect.

On closer inspection it turned out that a screwdriver had rolled down and shorted out on the positive terminal of the battery. I'd even disconnected the battery whilst I was working on the bike.

It had shorted out against the oil reservoir for the shock absorber.

This had heated up the braided line between the reservoir and the shock, melted the rubber inside the line and caused the oil to leak all over the bike.

So I've now got to send the shock away and get the pipe replaced.

Its not all bad as this means the shock gets a service, something its not had since I've owned it, and should come back all lovely.

I spoke with Proflex and they reckon on a 10 day turnaround. I'm just hoping that it is one which they still can service due to its age and also that it gets back before my test day.

After I got the bike cleaned up I went back to the carbs.

The ones on the engine have now stopped leaking through the overflow.

I removed these and put my other carbs back on.

All went well until I pressed the starter.

Nothing but a clicking from the solenoid.

So it looks like this has expired on me now, as I know battery is good and all fuses are still complete.

All this and it wasn't even dinner time.

I'd be lying if I said I didn't expect such teething problems but didn't think I'd need to get the shock sorted.

Still as I said should feel a lot better after a service.

Firstly the good news, she lives!

I had put oil on all the surfaces as I rebuilt it, but still wanted to pump some round to be safe.

So yesterday I went out and try to start her. Sadly the pumping of the oil took the edge off the battery, yes I forgot to put it on charge. So after the battery was charged I had another go, and she started, which was great news.

I've only let her run for a few minutes, mainly because she is in my garage and didn't want to fill the garage with exhaust fumes. She appears to be running on 3 but think this is more to do with the carbs than the engine, but we will see.

So today, all being well, I'm off to check the compression in the cylinders to see where we are at with those and then take her out of the garage to give her a proper run.

So to the bad news. I read today that Kells road races have been cancelled due to lack of funding. This is the second race of the season to be cancelled, the other being Bush, both for the same reason, increased insurance costs.

Part of the problem is that most road races are free to watch and revenue is generated by the sales of programmes. Now most programmes are about a tenner, so not much for two days racing. So if you are planning on going to an Irish road race this year, please, please buy a programme, as otherwise the sport may well die.

Well last night Stuart, official photographer and supplier of 'bits', came over to help me put my newly rebuilt engine into the frame.

It took literally 10 minutes to do this, as having a second person to help guide the engine whilst it was being lifted, made the job so much easier than trying to do it on my own.

With the engine in we then set about attaching all the other bits, exhaust, carbs, pipes, electrics etc.

By 8:20 we had got the bike to the point where all it needs now is oil and water and she should then be ready to fire up, so fingers crossed for that.

This left us  enough time to get cleaned up, make a brew and then watch TT legends, so a great evening.

Many thanks to Stuart for doing this as I'm sure I would've still been out there now trying to get the engine in.

On the subject of thanks, my thanks goes to my mate John who has drawn up a logo for me. He drew it up a while ago but it needed making bigger, as with all logo's, so that I can get some graphics made up for my van.

I wouldn't even know where to find photoshop, let alone use it, so luckily he came to the rescue and produced a logo which some of you have seen on my business card.

Now its of a size that it can be used on my van and also team Tshirts, available at a very reasonable price at the concessions stand. So even if all else fails I'll look the part. 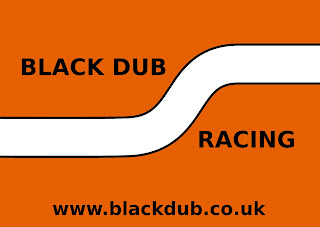 Most of you will recognise this as being based on the TT sign for 9th Milestone, Black Dub, which clearly shows it as a left/right, maybe I should've had them printed up in 2000?

Well I've finished rebuilding my engine and so fingers crossed it will be fitted into the bike this week.

I've already taken out the other engine that's in there so just a case of 'simply slotting the other one in'. Only a 5 minute job I'm sure.

Then it will be a case of getting it up and running.

To whet your appetites here is an on board video of Cookstown.

This is not me, but practice on an R6, so my ZX6R should be similar. I might not be, but my bike should be.

Top speed on my 600 should be 160 - 170mph, about 270kmh for everyone at 100hp.com. (ciao a tutti) Obviously this is dependant on gearing and length of straight. Still when its this close to brick walls it will still feel fast.