Sorry I've been a bit tardy with these reports, but been hectic here, which included a trip to Scotland for a wedding. amongst other things.

Anyway with this update you two for the price of one.

So first of all it was off to Silverstone, a track I last visited 20 years ago.

Arriving fashionably late on Friday morning I found an empty parking spot next to a power supply, happy days.

It was only after I set up that I was told that the bay I was in, was reserved for technical inspection later in the day. Thought it was too good to be true.

Luckily I was pointed in the direction of an empty garage by another guy who had also tried to sneak into this gift horse.

How’s this for a pit garage? It’s bigger than my house! Felt like I should wipe my feet every time I walked in. 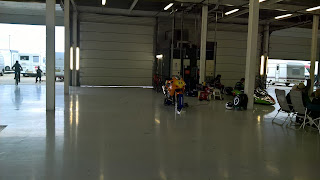 Practice went well and the bike felt like it was on rails, so was looking forward to racing.

Having left the bike in the garage overnight I returned Saturday morning to find tyre warmers fitted and plugged in, thanks Brad.

Racing went well throughout the day and having made the changes to the gearing I mentioned before, was staying with people a lot longer, but still didn't finish any further up the field.

So first job Sunday was to get the bike put on the club dyno, that way I would at least know if it was the bike or me that was causing the problem.

Good news and bad news. Good news, bike is making 69.2 BHP, class maximum is 72, so am close. Bad news, must be me holding the bike up.

Still first race Sunday was great and was all over one of my usual race partners, but sadly just couldn't get passed him.

I also realised that I was being super smooth with the controls, whereas you should open the throttle, rather than ease it open.

I tried this in the second race, but sadly I was arriving everywhere quicker, so had to work out my braking points again, so second race was a bit of a disaster, running off the circuit on one instance.

I was a bit disheartened on the way home as felt I should be running further up the field than I am.

But during the ride home I realised that it's going to take a while to get back into it. Just look at Guy Martin, who raced at Tandragee the previous weekend. He hadn't been to the circuit for 12 years and despite being on a factory Honda, qualified 17th. This was backed up by his performance at Scarborough.

He's the fastest person around the circuit, but was 7 seconds behind Dean Harrison.

I know our abilities are worlds apart, but just goes to show, it doesn't take long to become rusty, so there's hope for me yet.
It was also interesting to see Michael Dunlop at Oulton BSB.

Despite being the fastest man around the TT circuit, and fast at every road circuit, he was 25th at Oulton.

This confirmed what I said before, I'm riding it like a road circuit, not a short circuit.

So as I'd never been to Snetterton, my next race, I booked an instructor to give me some pointers.

Before Snetterton I decided that I wanted to put some better brake pads in. This was for two reasons. Firstly the ones on the bike were showing signs of wear, and secondly, I haven't got a clue what pads were in there. So decided to fit the same pads as I run in my Supertwin.

A great evening job, or so I thought. I removed the pads and thought I could clean the calipers whilst there. I started to pump the pistons out, and a seal started coming out as it was stuck to the pistons.

This was going to take more than an evening. Thanks to eBay for being open so I could order the bits I needed, and thanks to Stuart for building a tool for blowing the pistons out and also helping me bleed the system when it was all put back together.

So with the bike all back in one piece it was off to Snetterton.

Before I got there I had a text from Bemsee with the name and contact number for my instructor, who also gave me a bell to say hello and see what I wanted to achieve. If any of you race with Bemsee, I can't recommend this service enough. It doesn't cost anything and is really worth doing if you want to improve.

I met Dave, my instructor, on Friday morning at Snetterton. Sadly it wasn't raining as much as it was a monsoon.

Dave set off and lead me round showing me where the circuit went.

Upon our return he told me that I needed to relax as I was looking nervous. Too right I was. I was on a track I didn't know, in the rain trying to follow someone who knows where he's going, and is fast with it.

In the next session Dave followed me and pointed out what he saw as areas I could improve on.

The biggest area was that I was entering the corner too late and not using all the circuit on the exit.

This stems from road racing as you treat most corners as having a late apex, and you don't want to run out right to the edge of the road as that's where rubbish and gravel collect, and also the camber drops away.

So with this in mind, I set off with Dave behind me. Having taken his points on board the next session was a lot quicker.

Luckily the guy I usually race with was also there so Dave said to set off with him and see how I got on.

It worked, and I didn't see him after we set off.
So Saturday dawned and it was time to put what Dave had taught me into practice.

I saw Dave ahead of me in qualifying, but didn’t manage to stay with him for long, but being an instructor I didn’t expect to.

I improved my times in the two practice sessions I had by 7 seconds, so that was a good start to the day.

The races continued in the same vein. The guy who I usually race with was in front of me in the first race, but as we came into the last corner I thought I could have him. Sure enough I managed to out drag him to the line and finished about a bikes length ahead of him, result.

The two following races I was with him I managed to over take him on the first lap of each race, despite finding neutral instead of second in one race off the start line, oops. Not only did I overtake him I finished 32 seconds ahead of him in one race.

I played around with gearing and think I’ve found the best set up for future races, which sadly there aren’t any this year. Still will be handy next year.

By the end of the weekend I did a lap time 12 seconds faster than my fastest lap in the first practice, which is a good confidence boost.

As well as my times coming down, at my least favourite corner on the circuit, a left handed hairpin, by the end of the weekend I was going round with my knee on the floor, so confidence in my ability is growing too. I also don’t mind mixing it up with other riders too, and am happy to be amongst 30 other riders.

I know that sounds a bit odd, but generally I’m used to setting off in groups of about 10 in Ireland. The reason for the difference in numbers is that on a road circuit you set off in smaller groups because you can’t afford to put people off line by much more than a foot in some places. On short circuits you can be 6 foot off line and still be safe.

So all in all a good confidence boosting weekend and I learnt a lot. Plus I didn’t finish last in any race all weekend. Small steps, but steps in the right direction.

I wanted to see Dave and let him know how grateful I was after his tuition, but I couldn’t find him.

Turns out he’d fallen off in the first qualifying session and busted his collar bone.

I phoned him up upon my return and his first words were, “do as I say, not as I do”.

I’m back off to Cadwell next week so hope I can continue my new run of form.