So after what seems like 5 minutes, it was off to my last race of the season.

I set off and after almost 15 minutes I reached Thruxton on Friday evening with Stuart, who was there to give me a hand getting scruitneered.

With the bike and leathers all checked, I signed on and was still home in time for The Simpons at 6 o’clock.

Saturday morning I met up with Steve, who was going to come up by bike, but the weather was wet, so he came by car instead.

This meant it was a swap to wet tyres for the first practice session.

I got to the holding area early so switched the bike off. Come time to go out and she wouldn’t start.

Luckily I got a bump start from a chap so set off. Sadly I only got as far as the chicane and she cut out, and refused to start so had to be recovered at the end of the session.

Back in paddock we tried in vain to bump her, so swapped to a spare starter motor which I had after she played up at Cadwell earlier in the year.

Luckily she fired first time and I managed to get out for practice.

I’m glad I got out as she felt loads better compared to last year, bearing in mind the forks were bent back then.

Back to the paddock and there was just time to top up with petrol and I was back out again.

I got a decent start and stayed with the pack for the majority of the race, having some good battles with some guys.

I finished 18th out of 25, so was quite pleased with that, especially as I did a lap 7 seconds quicker than last year.

I had quite a few visitors who came by to say hello, including two armed with cameras.

So I’d like to thank Mark and Rob for these pictures of me. 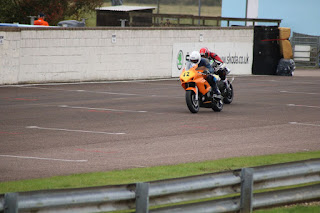 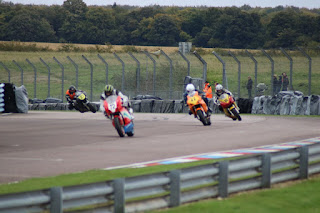 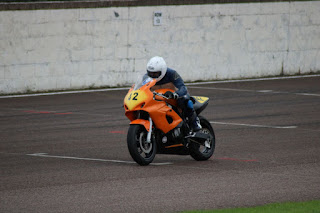 I had to wait until the last but one race for my second outing of the day, thought it was going to get dark before I got out again.

Luckily the sun stayed around until my second race. I started further down the grid due to my finish in the first race but got away ok.

Sadly I still suffer from losing my way once I lose the tow, so ended up having a lonely race, still didn’t finish last, but felt I should’ve been further up the finishing order.

All in all it was a good meeting, obviously helped by being just down the road, just a shame that there are not more meetings there.

So that was the last race and it’s now time to start on my Winter jobs list, which is shaping up nicely.

I will keep you up to date as I whittle the list down, as well as what my thoughts are as to what my plans will be for next year.

So until then, take care


Stuart
Posted by Unknown at 19:49 No comments: