Those of you that know me, know that I'm one of the few surviving souls who are not on facebook. As such it came as great surprise to hear there is a Black Dub Racing facebook page. Well thank you to whoever set it up, and also to those that post on it. Let me know if anything exciting happens on there though please?

The last few evenings, and today have been spent out in the garage playing with engines.

I've now dry built my spare engine and all seems good so have now started stripping it down to rebuild it for real.

One thing I had to check was whether I needed a base gasket or not. By removing the base gasket the compression is upped slightly, but I've been told that depending on the particular engine it may or may not work. Hence the dry run. Anyway all checks out ok so fingers crossed the build will go ok.

As I've been going along I've sorted and cleaned the best bits to rebuild the engine with, as I had 3 poorly engines but have managed to salvage enough to make this one and probably one other when I get time.

I know it may seem a bit daft making lots of spare engines but with the time scale between race meetings this year it will be easier just to drop one engine out and slot in another rather than trying to repair one in a week.

Talking of which, I am now confident enough to have started dropping my race engine out of the bike to fit my rebuilt one in when its ready.

As always whenever draining engine or oil the like I get a visit from Coco The Clown. I'm sure all of you who have attempted anything involving engine oil or the like have met Coco?

You know him, he's the one that kicks the oil drip tray, drops the sump bolt into the old engine oil and other such wonderful side splitting gags.

Well I sat him quietly in the corner today and thought he was asleep, but no, undid the oil cooler and he came to life. On this occasion he'd moved the drain tray just a couple of inches short of the cooler lines once they dropped.

Now thats cleaned up I can get on checking the valve shims.

Well first races of the season are now confirmed, so thats Cookstown 26 & 27th April and Tandragee 3rd & 4th May.

Before that I've got a track day booked at Castle Combe on 12th April where I hope to run my freshly built engine in, providing I get it rebuilt in time.

Castle Combe is a great track day as the TT racers use the circuit to get the suspension set up, as its the track in the UK most like the Mountain circuit, so should be good enough for a base setting for the Irish roads as well.

Its all moving along very quickly now, apart from the engine rebuild but it will get done I'm sure. 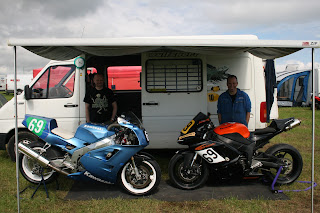 Above is another picture taken by Stuart at this years Southern 100 of both my bikes and my own Mr Motivator, Stafford. Not only does he give great motivational talks, 'you just need to be 3mph quicker everywhere', but he's also an expert at lockwiring, and makes a mean corned beef wrap.

Thanks for reading and speak soon 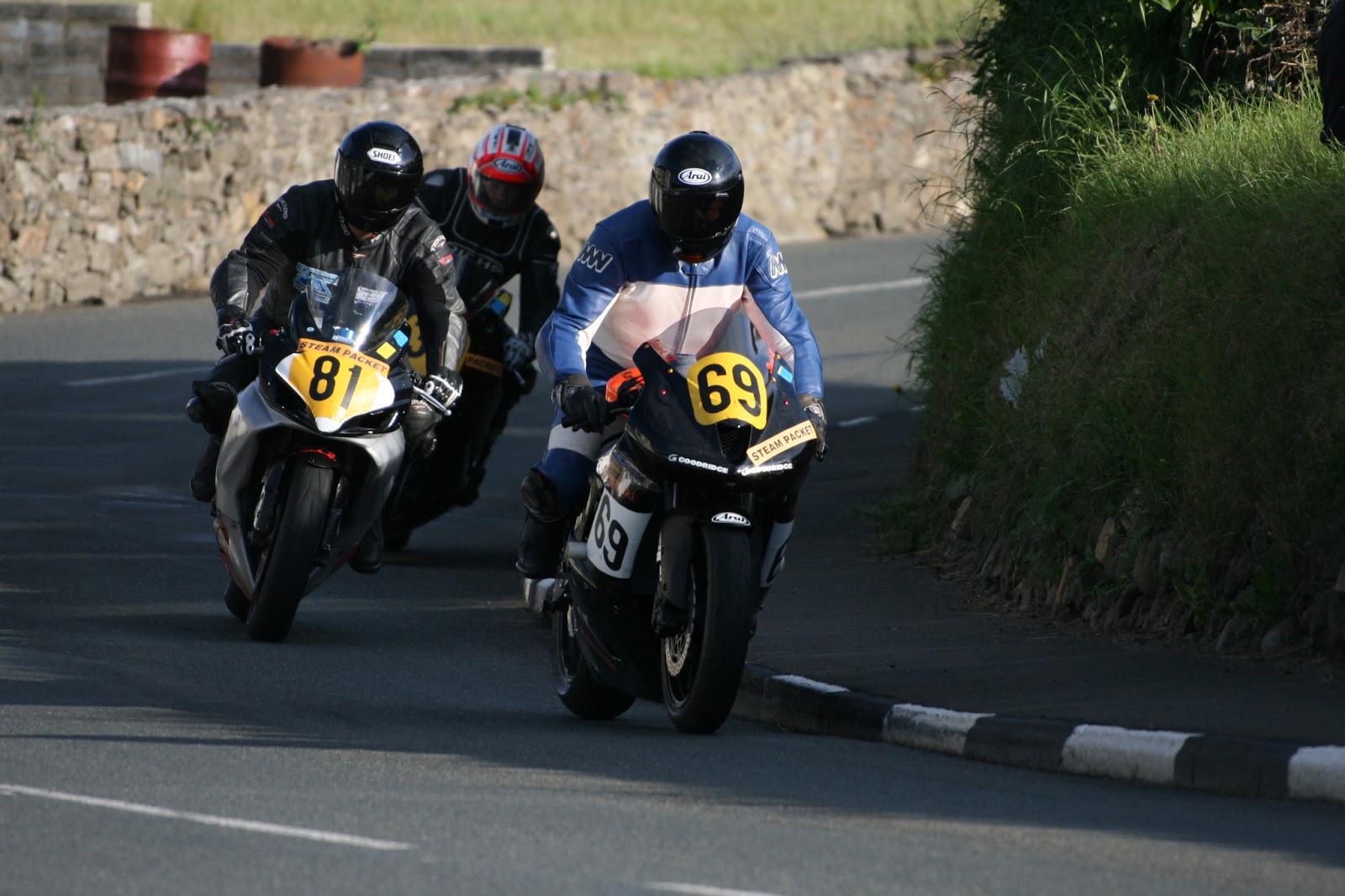 What can I say? I was staggered by the interest shown in my blog, and many thanks for the comments.

Calky remarked about meeting him at Southern 100 2008. Of course I do. I was waiting to go out in practice so was a bundle of nerves when a chap popped his head up over a wall and said could he ask a question?

I was expecting something about tyre pressures, gearing or some other technical question, bearing in mind I was just about to go out for practice so had other things on my mind, when all he asked was where I lived in Andover.

Turns out Stuart, and his wife Jill both live in Andover and had come over to watch the racing.

They were both surprised to get there and find someone else from Andover racing there.

Since then we have become firm friends and have enjoyed many road race meetings.

Stuart has also become my unofficial photographer, the one above is me on my ZX6R at this years Southern.

Stuart has also put me in touch with a guy selling a van, which I needed and he also keeps an eye out for any bits which may come in handy for me.

This year however Stuart and Jill have very kindly bought me two sets of wheel blankets to help keep the heat in when using tyre warmers.

So, thank you both very much for this, it was greatly appreciated and will be a great help. 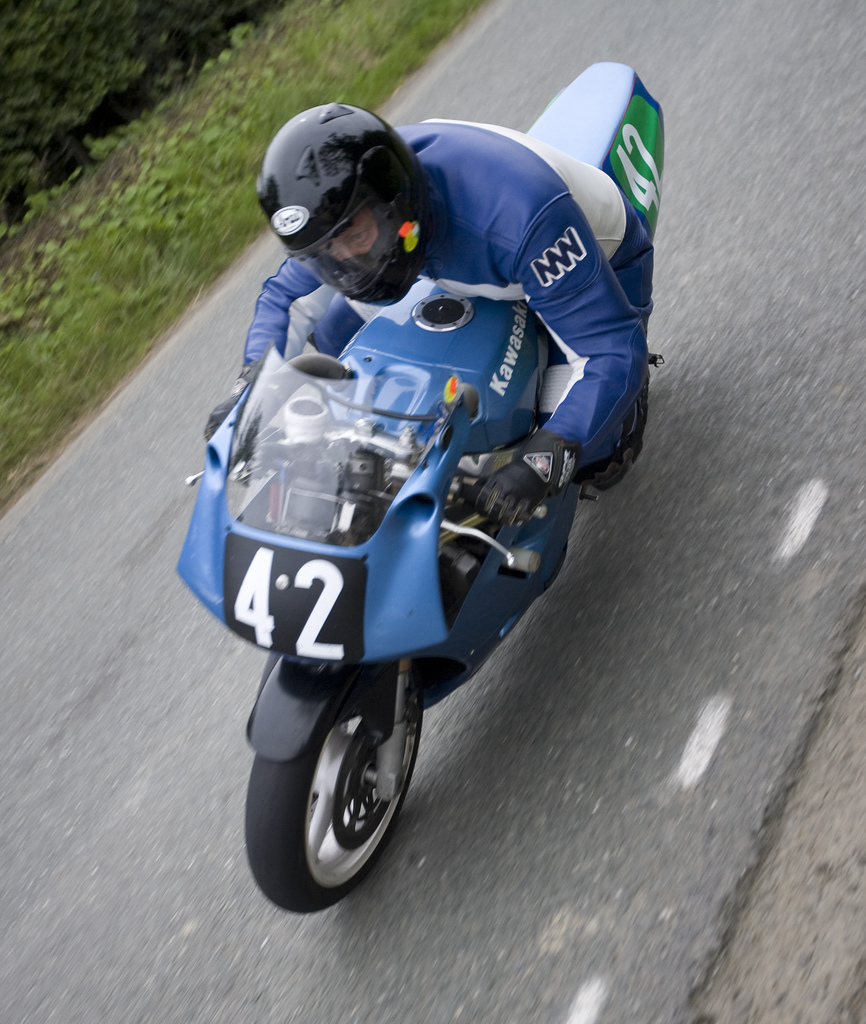 Hello and welcome to my Blog. Its the first time I've done a Blog so please bear with me if its not as slick as I'd like.

For those of you who don't know me my name is Stuart and I'm a National Road Racer.

My first experience of road racing was in 1994 when I visited the Isle Of Man TT, shortly after passing my bike test.

I remember watching the racing at Ramsey hairpin, when I had an epiphany, this is what I want to do. The sheer spectacle of those racing around the best road in the world at whatever speed you felt comforatble at still makes my hair stand on end, I was hooked.

Upon my return from The Island I started looking into what I had to do to start racing.

I spent the following months researching the best bike, leathers, clubs etc to get me started.

After what seemed a lifetime of looking in MCN bikemart I found what I was looking for, a 1991 Kawasaki ZXR400.

A visit to Bristol saw me as the new owner, you can't believe how excited I was.

My first race was with North Gloucester Road Racing Club at Keevil Airfield in 1995.

I spent the next 3 years racing at various circuits around the UK, which culminated in a very wet race in late 1997 at Silverstone when I got the final signature I required to gain my National licence, which qualified me to go Road Racing.

I'd enjoyed my time racing at short circuits but it was the roads that drew me, and so in 1998 I entered my first road race, The Manx Grand Prix.

On the entry form they ask what are your ambitions you have for the races, all I wanted to do was qualify and finish.

However after the first practice session I was second quickest in my class, so my ambitions grew slightly.

At the end of practice week I was second overall, so hoped I could keep that through the race.

Sadly it was not meant to be and due to a mechanical problem, my very ornate catch tank worked loose, I finished in 5th.

This did still earn me a silver replica, which before the week I would never have dreamt of.

In 1999 I returned with my 400 and a GSXR600. I was never comfortable with the 600 and after the race I found out that the front end was damaged due to an accident in a shake down race before the Manx.

The 400 never missed a beat and I finished 13th in the Ultralight weight Race.

Race day was postponed due to bad weather, so racing started on Saturday 2nd September.

Sadly the next I remember is waking up in Nobles Hospital 5 days later, after an off at Black Dub, which resulted in a very badly fractured skull.

I crashed on the second lap and was delighted to see that on my first lap, from a standing start, I had achieved my goal and did a lap of over 100mph.

I was off work for 5 months but never considered giving up racing.

It is true to say that its a real wake up call when even the Doctor who put me in the helicopter just shook his head when he saw my injuries, and believe me these guys are used to seeing severe trauma.

So I did take time off to do other things as you never know when your time will come as you don't get a tap on the shoulder saying this is it my friend.

I did some great trips and tried new hobbies but never lost my passion for road racing.

I did a couple of short circuit races to keep my licence at National level and in 2008 the draw of road racing became too much so I entered The Southern 100.

This is an excellent meeting and my love was rekindled.

So much so that as soon as I returned home I looked to see what other road races were left for that year.

Killalane was being run in September so entries were booked and I was to take part in my first Irish Road Race.

Due to the cost involved in getting to Ireland I decided to get a second bike, having sold the GSXR, so in late 2008 I bought a Kawasaki ZX6R.

I raced at the post TT races at Billown in 2009 and was back again for The Southern 100 in July.

Sadly it wasn't until 2012 that I manged to go racing again, so my first race was at Southern 100. Before first practice I was a bundle of nerves, but these were soon dismissed and after the session I realised why I love the sport so much. So much so that before I'd left I was booked in for Aberdare and also Killalane.

Aberdare is a great circuit and is a well run meeting and hope to race there again.

Killalane is also a great race and holds a special place in my heart as it was my first Irish race.

I know Isle Of Man is capital of road racing, but Ireland is where road racing lives and breathes, with racing on an almost weekly basis.

Everyone who is involved is so helpful and I look forward to racing there as much as I can.

I've always dreamt of doing as many rounds of Irish National Road Racing Championship as I can, so this year I hope to live that dream.

I'm hoping to do 8 out of the 11 rounds of the championship as well as Southern 100 and possibly Scarborough, so its going to be a busy year.

My intentions are to do the following:

Funds allowing I would like to do more, but this will depend on how the season pans out.

If you are at any of the above races then please feel free to pop along and say hello, I can talk the hind leg off a donkey where bikes are concerned.

Thanks for reading and I hope to keep the updates coming.