well I'm gearing up for a very busy week away.

I've done Southern a few times but not been to Walderstown before so I'll be watching the on board as much as anyone.

Hopefully while I'm away I'll keep you updated as to whats going on but thought I'd post an on board of Southern 100 and one of Walderstown to keep you interested.

Enjoy
Stuart
Posted by Unknown at 10:52 No comments:

Next meeting is Skerries so thought I'd post an on board lap of the circuit.

I've only driven around this circuit in a van but even from that I can see why its called Scarey Skerries.

Fingers crossed the weather will be as good as it is in this video.

Arrived there ok and had a lap in the van Friday evening, then spent the evening in the pub wondering what I'd let myself in for.

The course was really tight and bumpy out the back and all the corners were dead stop.

On top of this the 1st corner dropped away at the apex.

So after eating we went for another lap, which confirmed my suspicions.

This extra lap gave me concerns about the paddock as a lorry had to be dragged out as it had sunk into the mud at the entrance to the paddock, and it had grounded out.

Woke up Saturday and it was wet. So wet in fact they set up a temporary paddock on the road. When we looked into the paddock there was a transit van sideways on buried upto its bodywork in mud. Still this did mean we had a great hard standing to put the bikes on.

Initially we were told there was a newcomers coach but as it was a new circuit, we'd all have to go out, so it was decided that we'd get extra untimed sighting laps, on top of qualifying.

Practice went well and the circuit was great fun. My concerns about the 1st corner were wasted as they put a bale where the road dropped so that was a great help. I found the best way to deal with the bumps was to stand on the pegs and just let the bike bounce around.

I had a good dice with a couple of 650 twins and even rode around the outside of a 400 on one of the fast corners so was looking forward to race day.

When we arrived we were told we couldn't use the road as a paddock today as they needed to keep it clear for emergency vehicles.

So it was on with the cling film to keep mud off the tyres whilst the bikes were wheeled down to be checked.

The inspection car went out before the first race and the report was that it was wet but no standing water, so I decided to keep intermediates on.

By the time my race started, second race, this had changed and there was standing water on the circuit. With no time for to change tyres I went out on what I had.

Start went ok and was keeping up with the group, then on the second lap my front wheel tucked.

This happened on a fast sweeping corner and was doing about 130mph, needless to say this focuses the mind.

Next lap, same place, happened again, then again on another part of the circuit, so decided enough was enough and pulled in at the end of the lap.

As I came in the red flags came out as someone had come off.

Turns out they came off where my front tucked and they had to cut the hedges down to get to either the bike or the rider, not sure which, so think I made the right choice.

Whilst waiting we fitted wets to the 400 as I was out in the next race.

After doing this we were told there was a delay to see what the weather was doing.

After an hour the riders were called to a briefing and it was decided that it was not safe to continue, so the meeting was abandoned.

This was a shame as was really looking forward to the racing but with Skerries only two weeks away I didn't want to have to repair a bike should the worst of happened.

It's sadly just one of those things with anything outdoors, you can organise everything but not the weather.

Most of qualifying was untimed, but I have had a look on the Cork Web Site for times but none have been posted, still there is a picture of me on their home page, which was nice to see.

I was also shown a picture of me in Road Racing Ireland Magazine, which is a nice feeling, albeit a small picture of me on the grid, but shows I was there.

On Saturday I met a photographer who has put some pictures on the facebook page Steve started, so hope he will send them to me, he said he would, so I can post up here.

Right well I better get started on getting ready for the next one, which is Skerries, 5th July.

As always I'll be in the garage if you want me.

Well Cork is just around the corner so will be heading off later this week.

Finally got the correct brake pads delivered so will be fitting them tomorrow hopefully.

Then it's just a case of loading the van and heading our merry way.

Was a good call to fit my spare race engine last week, as the head is not yet ready for collection. Fingers crossed I'll have a couple of weeks after Cork to get it ready for Skerries.

As always if you are visiting the racing feel free to pop along and say hello.

All being well I will give you some good news next week.

Yesterday I received another picture of me at Tandragee, so thought I'd share it with you. 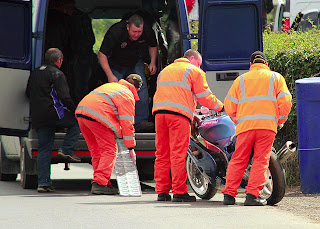 This was taken after my engine went pop and the marshals were loading her for the trip back to the paddock. Once again my thanks Jimmy for the photo.

On the subject of marshals, I'd like to thank all those that give up their time to do this very important job over race weekends.

I'm sure you are all aware that they all do it for the love of the job and receive no payment for it, and without them there would be no racing.

Their job is sometimes very stressful, but they know how to keep cool should an incident occur, which allows the incident to be cleared and help sourced should it be needed.

Places like The Manx Grand Prix always need marshals, so anytime you are visiting I'd recommend signing up. You are given training and then stationed with experienced marshals, who will show you what to do if you are called into action.

Over the years I've introduced several of my mates into marshalling when at the Manx, and all have loved it and gone back for more. So go on give it a go.

So thank you one and all for all the help you give all of us at some point during our racing careers.