For those of you who enjoyed the highlights last night, part two is on same time next week, Thursday, ITV4, 8pm.

Cheers
Stuart
Posted by Unknown at 15:40 No comments:

Just found out that ITV4 are showing highlights of this years Southern 100 at 8pm, Thursday 20th July.

Keep your eyes peeled for number 99.

I’m writing this whilst looking out of the window, with a view of Snaefell. So yes, I’ve been racing at The Southern 100 on the Isle Of Man.

Neither Steve nor I could believe it was a year since we were last here, seems like yesterday. Sunday was the usual scruitineering, and chance to catch up with some familiar faces.

Was good to catch up with some of the guys who I raced with over in Ireland over the last couple of years, and hear the latest news, which included the concerns around the paddock about if Killalane will run, still doesn’t sound hopeful.

Both bikes went through technical inspection ok and so was due out on 400 first.

She seemed a little reluctant to start but when running sounded ok. As soon as I left the dummy grid I knew there was something wrong, but hoped it just needed a run to clear her as she felt as if she wasn’t running on all cylinders.

It was quite clear she wasn’t going to clear, so ran her back to the paddock.

Luckily I spotted the problem straight away, a wire had come out of the connector to one of the coils, so a nice easy fix.

We ran her back to be checked over, only to be asked by one of the scruitneers, “what’s all this oil?”

So it was back to the van to investigate.

It looked serious and as I was out soon and the second 400 practice was looming, I realised that it wasn’t going to get fixed, so that was the end of the 400 for the week.

It’s really annoying as the engine had ran fine last year and hasn’t been apart since then, so what is the matter I really don’t know.

She was running fine and I was catch the 4 guys that had set off in two groups ahead of me, so was feeling good.

Before I went out the forecast was for local showers, so when I got spots of water on the screen I didn’t worry. Shortly after my foot slid off the footpeg, so I then started to think it wasn’t rain.

Looking down at my temperature gauge my fears were confirmed, she was over heating, so pulled in and waited to be collected by the course car.

Word of advice to the organisers, please don’t get course cars with leather seats in to collect riders, as race leathers on leather seats have the same amount of friction as ice.

This resulted in me spending half the ride back behind the passenger, and the other half behind the driver, all the time trying to get my seat belt to connect.

On the plus side, the water from the radiator did wash off the oil from the 400, so all worked out nicely in the end.

With the bikes loaded we headed off to base to have a think about what we were going to do.
Tuesday morning arrived and we set about checking the 650 over. I drained the oil and what I put in came out, so no excess fluid had got into the engine, which happened the last time I had problems with the cooling system. Likewise the water level stayed in the same place in the radiator, so more good news.

Steve had found out that SV’s are prone to getting airlocks in the radiator if filled too quickly.

I’ve filled the rad many times and had no problems, but on this occasion it was looking like that I had managed to trap some air in there.

As we could find nothing else we headed back to the paddock for practice to see if we had cured the problem.

Practice went well, and despite endlessly watching the temperature gauge, I managed to knock a second off my previous fastest time around the circuit, which I was very happy with.

On the way back we worked out what the qualifying time was, and I was well under it, so happy days.

I was told that I had qualified, but they were only allowed 32 riders on the grid, and I qualified 34th.

34th doesn’t sound great, but there was 50 entered, so not too disappointed.

Luckily the guy just in front of me was there and was told that one rider had dropped out, so I was now 1st reserve.

This meant that I was to take my place on the grid, do the sighting lap, and see how many had turned up to race.

I did my sighting lap, and sat anxiously waiting to see if I could race. Luckily I got the thumbs up, so got my head down.

It was a good race and was just coming onto Great Meadow when the leaders flew passed on the final lap. Still I was just pleased to have had a race.

With the bike loaded we set off back to base with a smile on our faces.

We arrived at the paddock on Thursday morning knowing that I may well not be out in the race today, but luckily Steve said we should get the bike through scruitineering first and then check with the race office.

This was a wise move as the scruitineer noticed the tyre valves were loose, so couldn’t pass me.

We got the wheels off double quick so new ones could be fitted, whilst Dave Clarke, went and checked to see if I was racing.

Whilst refitting the wheels Dave came back and told me I was once again reserve for the Supertwin race, but was on the third row for the Support race, one I didn’t even know I was in for.

With the wheels back on, bike was checked and passed, so we were good to go.

Again I was lucky enough to take part in the Supertwin race and had a much better race. As well as not being lapped, I also knocked another second off my fastest time, so still improving.

After having a mild panic about fuel, or lack of, for the extra race, we had loads, all was looking good.

Whilst sat in the holding area it started to rain, so we hoped it wasn’t going to last, and luckily it didn’t.

The race started and from my ninth place on the grid I set off and was 3rd into the first corner, which was great.

I was overtaken by one guy on a straight and stayed with him through all the corners only to loose him on the straight again.

My main racing partner this week was Kevin ‘Irish Ago’ Murphy, and sure enough he too also overtook me on the straight.

The three of us had a great dice, which included us being 3 abreast on the brakes into a corner, and Ago and myself side by side coming out of Cross Four Ways, and looking across at each other whilst willing our bikes to accelerate quicker than the other.

When we crossed the line the three of us were covered by just over a second, which was great after such a good race.

I eventually finished 6th, and had improved my time by another 3 seconds, so a cracking race all in all.

When I caught up with Ago later, he admitted that we were level ability wise, but his bike just had the extra speed on mine, which was a nice compliment as Ago was one of the guys who was way ahead of me the first time I raced the course.

So by the end of the week I’d finished all 3 races I started in, improved my lap time by 5 seconds in total, and got another finishers medal. 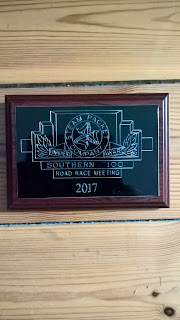 Another for the collection

If you had told me at the end of Monday evening, with a broken bike either side of me, that by the end of the week I would have been faster by 5 seconds than I’ve ever been around the course before, and that I would have finished sixth in a race, I’d have thought you were mad, so just goes to show don’t give up.

I really do think the extra track time I’ve had this year has helped and think that if I’d had the extra laps of the practice session I missed, I could’ve been a bit quicker.

It’s really odd because, even though I have been round the corners loads of times I still have to build myself up to going quick around them.

For instance, I know I can go round Stadium Corner with just knocking it down a gear, however at the beginning of the week, I brake and come down two gears, why I just don’t know. When I get around it I ask myself why did I slow down. Strange how the mind works.

So that’s it for another year, is always a shame when it ends, but hopefully I will be back next year, but I’m going to have to have a long hard think about what I will be racing as I now have doubts about if the 400 will last, which is a shame as love riding her., but we will see.

Not long to wait for my next race, as all being well I will be at Cadwell the first weekend in August back on the Minitwin.

So until then, take care