Just received some excellent photo's of me at Killalane from John Burke.

I can see why photographers like it when racers wear clear visors. I never knew I had such a look of concentration as the one John captured. 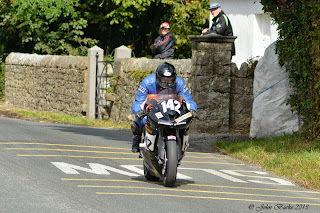 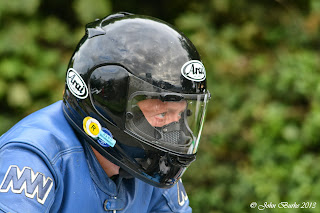 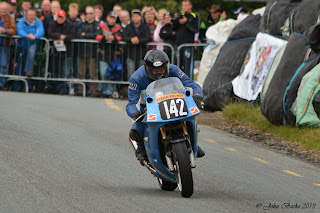 Thanks once again to John for these, I hope you enjoy them.

Well it was a bit of a non event from my point of view.

After an eight and a half hour drive we arrived at our lovely accommodation, thanks Steve, and I was straight to bed due to our late arrival.

We arrived at the circuit and finally found a spot in the paddock. We parked up in the sidecar area as there was no room at the inn in the solo’s area.

Bikes were checked over and it was straight out onto the circuit.

I’ve got used being taken around the circuit in the newcomers bus, where we are shown around by experienced racers, followed by newcomers laps so you can find out where the circuit goes. As I’ve said before, You Tube is ok but it’s only when you get out on the circuit that you really find what it’s like.

But sadly I didn’t have the luxury of the bus or the newcomers laps and it was very much like being thrown in at the deep end.

It didn’t start well as I missed the turning in the paddock for the holding area, so had to turn the bike around and try again.

The organisers split the 600’s into two groups. Being number 87 I was out with odd numbered bikes. This meant that I was out in the group with number 1, a certain Guy Martin.

Naturally he was in the first group whilst I set off near the back. Still it wasn’t long before I got to see him again, as he came underneath me into one of the corners, which then meant the other fast boys would be along soon, sure enough they were.

I like to take it easy on a new circuit as I’ve found that if you scare yourself on a corner it takes quite a while to get my confidence back to attack the corner and there is no use in flying into a corner until you know where you need to be for the next one.

The circuit was very damp in places and this was proven by on my second lap a rider was down at the hairpin.

I also found it difficult as there were no obvious signs of which way the circuit went. Usually you can see tree lines, telegraph poles etc which follow the road.

I did about 4 laps before I pulled in as felt I was just getting in the way and not learning anything.

My pit crew, which included James this weekend, wondered what was wrong. “It’s too dangerous out there” was my comment. Which when you consider where I’ve raced the rest of the year seemed a bit of an odd comment, but I stand by it.

I wasn’t sure about going out on the 400 but Steve asked if there was anything we could change to help, as he could see I wasn’t happy.

Anyway I went out on the 400 and still didn’t feel at all comfortable on it, so once again came in early.

Sadly that was it as far as my racing went as decided I really didn’t fancy it.

I did feel bad as people had come a long way to watch and help, but they all said that it was me out there and if I didn’t want to do it there was no need for me to go out. Thanks guys, it meant a lot.

It wasn’t the end to the season I’d hoped for but there you go.

Still on a positive note I did get to walk around the paddock and talk 650’s to various riders, which helped as I have more information to base my supertwin purchase on.

Anyway below is a clip clips of the racing from Scarborough for you to have a look at, don't worry all were safe.


Well back safe and sound but slightly disappointed to be honest.

After being told that Skerries hadn’t had any rain since July, the only natural thing that could happen did, it rained.

So when we awoke on Saturday morning we did a lap of the circuit in the van to see what it was like. Most was ok but my least favourite corner on the circuit, the old graveyard, was still muddy. Not lumps, obviously but you could tell it wasn’t going to be as grippy as I would like.

The first practice was out on the 600 and was time controlled, which was handy given the conditions. Practice went well but the front didn’t feel right. I’d been playing around with the suspension and thought it was this. Thinking about it all I needed to do was adjust the steering damper, and all was well.

When I returned to the paddock my bike looked as though I’d been motor crossing on it, it was so dirty.

Second practice was also on the 600 and the adjustment I’d made worked which was good, but still didn’t have the confidence in the front until the last few laps. It takes a while to get confidence back in a bike after it’s given you cause for concern, and with only 5 laps of practice you don’t get much time to get it back.

I did struggle finding braking markers as the roads were still slippery, so found myself driving up to corners shaking my head as I was braking far too early.

I took the 400 out for one session and realised I needed more acceleration as was changing into top gear far too late.

I was going out in a second session but as I was in the holding area it chucked it down with rain and knowing how greasy it was before I didn’t fancy chancing my arm on intermediate tyres when it was really wet.

Sunday dawned as bad as Saturday and I was out in the 1st and 2nd races. Not ideal as I had to make a tyre choice for both races without seeing what the road was like.

I had intermediates in as Sunday was forecast as dry. As always this turned out to be the wrong choice as whilst in the holding area it chucked it down again.

As I didn’t have the wets with me it was back to the van but by the time we’d got the front out the bikes were on the grid, so missed the race. I was later told that it wasn’t as wet as it first looked as it dried up really quickly.

This was a shame as this was the race where I had the chance of finishing in the top 15 as was only a couple of points off and those above me weren’t racing that weekend.

Still I had the right tyres on for the second race on the 600.

All was going well, but still struggled with braking points. Then on the last lap the bike ran out of fuel. This was due to having to do 2 extra laps due to a red flag on the first lap, meaning the race was stopped and restarted. So it was another trip on the back of a travelling marshals bike back to the pits.

When I arrived Steve told me the bad news that my generator had packed up, which meant no tyre warmers or kettle.

I wasn’t looking forward to the second 400 race as it was turning into one of those weekends. Still I went out and got a reasonable start and caught and overtook a 650 which was good, and was catching another in front. Sadly the red flags came out again and it was back to a restart.

I got an ok start but 650’s off the line just have so much low down power that was overtaken by all those behind me.

I managed to stay with two 650’s throughout the race but try as I could I just couldn’t pass them. A 400 makes it’s power at the top end and so takes longer to accelerate, whereas the 650’s have low down power which helps out of slow corners. I found myself having to brake in the corners as the 650’s in front were that much slower and there is not enough room on the roads to go around the outside of them. Once we’d get to a straight they would just pull out of the corner and it would take me the length of the straight to catch up again.

Still it was a good dice and nice to know that I could stay with these more powerful bikes, even if I couldn’t get around them. I also got a better line around the graveyard corner, so felt I’d achieved something.

Whilst walking around the paddock after the racing had finished I was looking at various 650’s to see what mods need to be done to make one competitive, as this is what I want for next year, when Steve pointed out that they were running 42 tooth rear sprockets and I was running a 47. This goes to show how power is made on different bikes. The larger the sprocket, more teeth, the better the acceleration but less top speed, the less teeth the faster top speed, but less acceleration. This clarifies that 650’s have more low down power than the 400 which is why I was struggling.

So I’m now researching which 650 to go for as there are two to chose from. Suzuki SV and Kawasaki ER.

Both have good and bad points but will no doubt come down to what the wallet will stretch to.

Anyway it’s off to Scarborough this weekend, another new circuit for me, where I will be out on both bikes, number 87 this time.

Here's a taster of what I'll be doing.

So if you are around do come and say hello, I hope to have the kettle working by then, especially if you have a 650 for sale.