Back in the world of internet connection so time for a much overdue update.
Cast your mind back to Wednesday, which seems like an age ago to me, and we set off for the ferry from Liverpool. Not five minutes down the road and we had to turn back as of all the stuff I've had to sort and pack I forgot my leathers. As I might need these we had to turn around, load them and start again.

Rest of journey went well and had a good night in a hotel enroute.

Next morning arrived at the ferry terminal to be greeted by vans all heading to Cookstown.

After a lifetime, well 9 hours, on the ferry we arrived safe and sound in Belfast birthplace of Titanic. She was ok when she left Belfast I've been told.

After collecting my pit crew from Belfast airport we set off for our B&B. Top tip if visiting the airport. Get your pit crew to walk out of the pick up zone because if you are in a van it'll cost you four quid to get them.

Arrived at B&B to be told we'd been moved, so off we set again.

Arrived at a great house and told we were sharing with another couple of racers, namely Sarah Boynes and Maria Costello.

We had to pop out to sample a local Guinness and had the best I've ever tasted in a great Irish country pub. Sadly I was driving so just the one for me. Whilst driving back it started snowing, not what I wanted to see.

We arrived back at the house to find Maria putting sponsor stickers on her newly painted fairing. Glad its not just me that winds up doing last minute jobs.

Woke Friday morning to sunshine and showers, and that was how it stayed all day.

My first lap of the circuit was in the newcomers coach. This is a lap with commentary from two very knowledgeable racers.

Bikes were inspected and then it was off for some laps.

It's fairly daunting setting off for your first laps of a new road circuit but the chat on the coach helped and had some markers to look out for.

Sadly there isn't a great deal of practice time and the weather didn't help, we spent most of any down time changing from wet to intermediate tyres. Which ever tyres we put on were wrong as the weather was that changeable. One practice I went out on wets as it was starting to rain and during the practice a track side air bag deflated so they stopped the session. In the time it took to reinflate the bag it had stopped raining and was bright sunshine causing the track to dry.

The 400 wasn't running great so we changed the carbs to see if this cured the problem.

So to race day.

Weather was perfect, clear, bright and most importantly dry.

Bikes were inspected again and no problems so headed out to the grid for my first 400 race.

Changing the carbs hadn't cured the problem we'd had in practice so I pulled in at the end of my sighting lap.

Whilst changing the carbs again I noticed the fuel tap was working properly causing fuel starvation, so we hoped this was the main problem.

It was then time for the 600 race. For some reason I started 5th on the grid so managed to get a good start especially as the guy in front bogged down so was left standing.

Sadly I didn't hold 5th for long and was slowly overtaken my most of the field.

Still I felt loads more confident and the track started to make sense and I could link corners together.

I finished second from last but my time had dropped from 1:59 in  practice to 1:48, so was very happy with that.

Chatting to a guy in the paddock he said if you want to run with the fast boys you need the bank of Ireland funding you.

I started the next 400 race from 23rd on the grid. I was almost round the last corner the grid was so long and thought I'd need strategically placed mirrors set up so I could actually see the flag raised at the start of the race.

Still I saw it and got a reasonable start. I was no match for the others and finished last but had dropped my time from a 2:06 to a 1:55 so again was happy with that. The running problem was much better and whilst checking the bike over after the race we found an oil leak which was coating the spark plug caps with oil, so fingers crossed this will be the route of the problem.

So all in all I had a great start to the season. There are places that need improvement but as a newcomer to the circuit I was pleased with what I achieved especially considering the changeable conditions in practice.

I met some really good people in the paddock and a special hello goes to Owen from Slim Jim's cafe Draperstown, hope to see you in the week.

Luckily now I have a weeks rest before Tandragee, time I hope to spend doing some homework by watching loads of on board footage of the circuit.

I've been told that maybe there is a MCUI track day at Kirkistown so may head over for that if weather is ok just to get some miles on the bikes in readiness for next weekend.

Here's some pictures from the weekend. 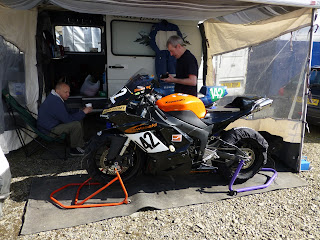 Black Dub HQ with bikes ready for the off. 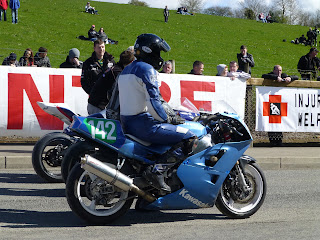 Awaiting nervously for racing to start 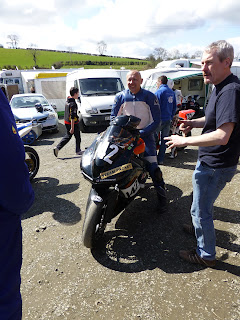 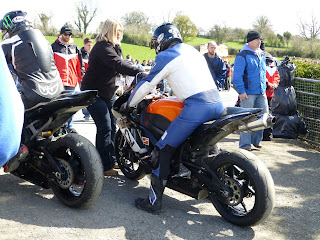 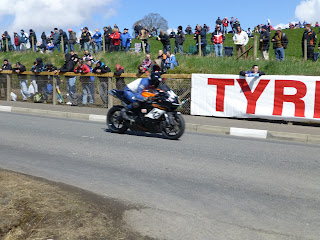 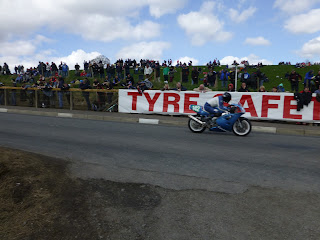 For more pictures and race results go to

I've been told that there will be highlights from the racing on BBC NI 14th May so I'm sure is worth a watch.

I started the year saying that I'd do as many as I can, and all being well would only select certain races to return to, well Cookstown is on that list.