Well last weekend it was off to Cadwell for another weekends racing with the Auto 66 club.

The last time I raced with Auto 66 was Scarborough back in 2013. That weekend didn’t work out how I planned, so I hoped this weekend would be better.

John and I arrived on Friday evening and set up camp in what seemed to be a very empty paddock.

After making home, we had a walk around the paddock.

At this point I was somewhat concerned as I only saw half a dozen bikes, most of the paddock was taken up by go karts.

John actually asked if I had the correct weekend.

Still when we got up Saturday my concerns were laid to rest as there were more bikes than we’d seen the previous evening, which was a bit of luck.

John took the bike for technical inspection, only to arrive back shortly as the rear brake wasn’t working.

After an adjustment on the rear master cylinder all was working, so was given the all clear to race. 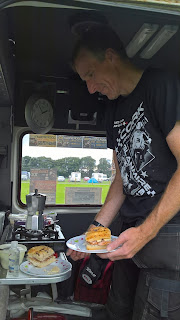 Not only did John twirl spanners, he was also the team barrista for the weekend, bringing his posh coffee pot with him

I headed down to practice and was amongst a wide variety of machines, which was just as well as there were only 5 Minitwin/Supertwins listed in the programme.

Practice went well and had a good dice with a guy on a supertwin, eventually getting the better of him.

So it was time for my first race, which I didn’t get a great start in and found myself amongst a load of CB900’s and GSXR750’s.

The CB’s had handlebars roughly half the width of the track, so overtaking was interesting. Still I got passed a couple and had a good race with a guy on a GSXR750.

Times were a couple of seconds off what I had done before, which I put down to a different gear ratio I was trying.

When we got the times I decided to go back to the previous gear set up to improve my times.

In The second race I was quicker, but still not as fast as had been, but I did have a good race with the guy on the Supertwin who I’d practiced with earlier. I was actually quicker than him on lap times and had a faster race time, but just couldn’t get passed him. He crossed the line 3 tenths of a second before me, it was that close.

Sunday started with another practice and I was 6th quickest overall, and second fastest SV650, which was good, so I hoped grid positions would be done on this, but sadly it was taken from finish positions from the Saturday race, so started in 13th, unlucky for some.

I managed to get a good start and saw the supertwin not get a great start, so was happy to be in front of him.
Things were going well until I tipped into a fast right hander, called ‘Charlies 2’.

As I tipped in I hit something so had to stand the bike up, which caused me to run onto the grass.

I’ve run onto the grass before and thought I was safe, until the front went down a rabbit hole and I went over the handle bars. So decided it was probably best just to lay her down, which I did.

When I got up I saw the bike that hit me. Yes you’ve guessed it, it was the supertwin I’d been racing with.

As you can see from the picture below how close he was, the black mark up the arm of my leathers, is off his tyre. 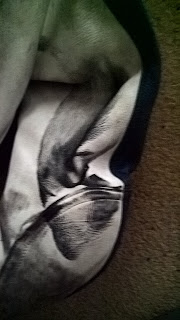 Luckily we were both given the all clear by the doctor, so set about repairing the bike.

Luckily it was mostly levers that took the brunt of the impact, those that couldn’t be replaced, were hammered back into shape.

With the bike fixed I set off for the second race.

I wasn’t at my best as I banged my knee when I came off, and as time went on it started to stiffen up and got harder to push down on.

Got a good start and it was more a case of making sure that there wasn’t any other damaged that we hadn’t seen, my biggest fear was the forks could have been bent, but luckily they hadn’t.

Had a good battle with a few different guys, but still didn’t improve my previous visits time, but I wasn’t that surprised by that, all things considered.
It was a strange meeting and just didn’t really feel like it was a proper meeting for some reason. It was well run and relaxed, but just seemed to be missing something for me.

So I now have a few things that need some attention and I’m currently waiting for my knee of many colours to arrive, which is coming on nicely.

All being well I’m out at Cadwell next in September, so hopefully I’ll get the bike all sorted by then.


Cheers
Stuart
Posted by Unknown at 21:11