So, one sunny July evening Mr. Piston was enjoying a nice trip along the wonderful roads of The Isle Of Man, just outside Castletown to be precise.

He was feeling rather good, going up and down, and all was good with his world.

He could hear his next door neighbour doing the same, and it was a nice feeling that he was flying along one of his favourite roads, doing what he was designed to do.

There he was lost in his own little world when he got an unexpected surprise.

It was Mr. Valve.

'Hi,remember me, Mr. Valve, you said if I was ever passing to drop in.'

I finally got to strip the head and piston out of my 400 engine that went pop at this years Southern 100, and this is what I found. 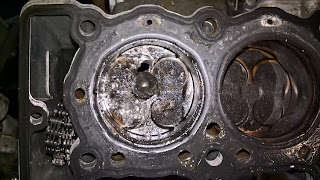 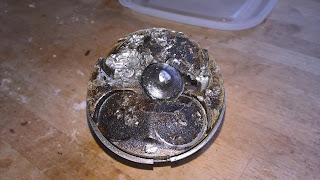 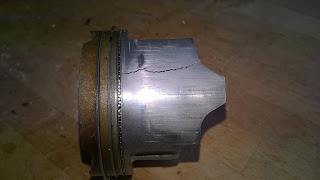 A bit of a mess, to say the least.

So now starts the rebuild, and as it's apart I will try and squeeze some more power from her, seems rude not to.

Luckily I have quite a few spare engine bits as they are starting to become harder to find, but have enough for a couple more rebuilds.

It's a shame as there was talk of running a 400 class at The Classic TT next year, but that isn't going to happen, but am sure there will be a 400 class on the roads.

Luckily I enjoy rebuilding engines so it will be no hardship.

Some bits are already being prepared so I will update as we move along.

So with Christmas over, it's back to the garage for me.

Have a great New Year and am already looking forward to the new season, just hope I will be ready for it.