Well it's all been busy here at Black Dub HQ, and for a change it's not involved spanners and oil, but fibre glass.

When I collected it the guy said he didn't know which model Gixxer it came off as it was fitted to a Kawasaki when he got it.

As such whoever had fitted it had cut the belly pan down the middle and loped the rear end off it.

Now to be suitable for racing, the belly pan has to hold the contents of the sump, in the event of it leaking, so a lot of work had to be done to make it water tight again.

Luckily my Dad is a trained boat fitter, so what he doesn't know about fibre glassing isn't worth knowing.

As a kid my Dad was repairing a boat he had bought, so I remember many a day helping him mixing resin and laying fibre glass. This is also where my love of the smell of fibre glass came from.

So with the knowledge I had I set about fixing the fairing.

Ideally I would've had a mould to work from, but no such luck, so had to build it free hand.

After purchasing an industrial size amount of matting and resin, a hefty £15, I started to work out how I was going to tackle this.

Firstly I made 3 pieces of fibre glass sheet by laying the matting on a piece of glass, so I would have a nice flat side. So the resin doesn't stick to a mould, you should use a special polish, I found Mr Sheen works just as well.

The sheets turned out fine, but I realised that attaching them to the fairing would be a pain, so it was back to the drawing board. After a chat with my Dad I realised I could cut one big piece of matting, attach it to the fairing and then use my glass mould technique to make the sides and the bottom of the belly pan. 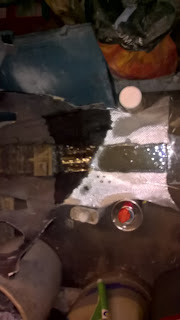 So over 3 evenings I managed to mould the two sides and the bottom in one piece. This just left the end piece. Luckily I hadn't thrown out the 3 bits I had made earlier, and one of these, when cut to shape, fitted perfectly. It was then just a case of attaching this to the belly pan, which was simple enough. 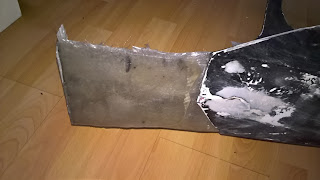 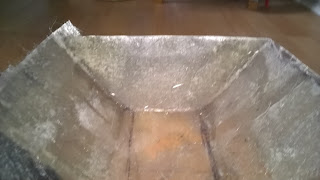 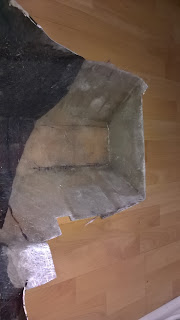 With it all dried, and as one piece I offered it up to the bike, and with minimal fettling, it fitted great.

There is a lot of making good needed, but that's ok body filler is quite cheap.

Overall I'm really pleased with the way it has turned out. It's not great but does the job, and once painted, you'll never notice it.


Now it's just a case of fabricating some brackets to hold it on, and job's a good 'un.

So it's back to the garage for me.

Cheers
Stuart
Posted by Unknown at 16:23