Here's a little teaser for you, can you spot the difference between the two photo's below? 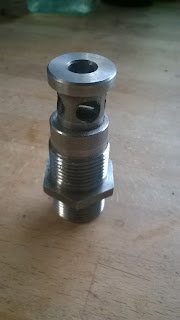 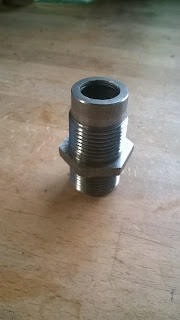 Give up? Well I have to say it's not that obvious,but the answer is about 2 bhp, that is according to Slick.

For those not intimately familiar with ZXR400 engines, it's the fixing for the oil filter, which I have been told that with the oil way removed from the end, hence the difference, and the fact I don't use an oil cooler, allows the oil to circulate better and means I am using all the oil in the sump rather than losing what is directed towards the oil cooler.

And according to Slick this means another couple of horse power, which is good, plus I've saved a bit of weight too. So all good news, and even better was free.

If only all hp gains were that cheap.

SV is coming along nicely with the engine back in the frame and various other odd jobs have been done. Am now working on removing the dents from the exhaust before refitting so I can get on with trying my new fairings on for the first time.

Hopefully this won't be that far away, and will update you as soon as I can.