Upon arrival on The Island we set about fitting some new throttle bodies to the Supertwin to increase power. To get these set up properly we went to see Slick Performance who ran the bike up on his Dyno. Whilst this was being done we had to source a new rear wet tyre as forecast wasn’t looking grand for practice.

Sure enough practice was a very wet affair, but after Tandragee earlier in the year was quite comfortable in the tricky conditions, ending practice 8th fastest on the 400. Sadly the weather deteriorated and cancelled after the 400’s, so no 650 practice.

Tuesday dawned and the weather hadn’t improved, so we changed wheels yet again, in fairness we are getting quite good at this now.

Practice was wet and after leaving the holding area and the back end tried to come around and meet the front, I remembered I had a new tyre on the back, so took it easy for a couple of laps.

On the fourth lap my exhaust came loose and started making a real racket. This happened on the approach to Cross Four Ways, where I knew Ian, a marshal I know, was watching, so wondered if he loosened it, as he like the sound of it with no can on.

When I checked the practice times, it became apparent that I hadn’t qualified the 650, and no amount of pleading would change the organisers minds. So we packed up the 650 and that was that for it’s week.

Better news on the 400 though, and I qualified 13th fastest for our first race on Wednesday evening.

The lights went out for the first race and the bike directly in front of me snapped his chain and shot it out the back like a spear. I went to the right to avoid it and so did the rider to my left, which nearly ran me onto the grass, losing any advantage of starting from 13th.

After regaining my composure I set off after the others but soon realised I was going to have to treat this race a practice session, being the first time out in the dry. I just couldn’t get any rhythm and was mucking up gear changes all over the place, so just tried to work out where I was going wrong. It came as no surprise after the race that I’d not got anywhere near my previous personal best lap, so headed home and hope for a better day on Thursday.

Thursday was another dry hot day so did a couple of little jobs and got the bike checked over before the race.

I got a much better start, and had nothing thrown at me this time, so got my head down and went for it. I felt much more with it and had several good dices, including waving to Jez Hill as he bogged down whilst trying to overtake me. It was like a red rag to a bull and he was soon passed. After this I had a good race with Chris McGann on a 125. Due to the way a 125 makes it’s power I could overtake him on the fast bits but he could carry much more corner speed, so just waited for him to come passed at every corner, which he did, but was good fun.

I finished a respectable 15th and found out that I’d gone two seconds quicker than I had done before around the Billown Circuit, which was a good way to end what had been a frustrating week. 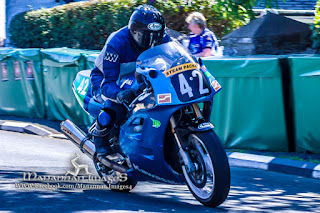 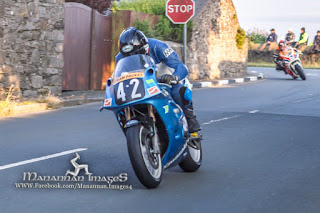 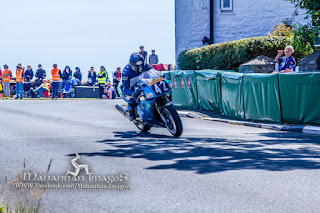 Hope you enjoy these cracking photo's from John at Manannan Images, many thanks John 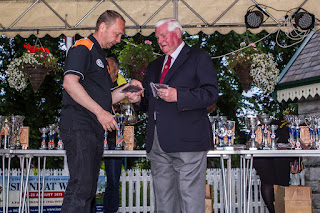 Another finishers medal to add to the collection

It’s only a few days and we are back over to Northern Ireland for the race of legends at Armoy, all being well.

So until then, take care and speak soon

Cheers
Stuart
Posted by Unknown at 14:55