Well last weekend I was in Northern Ireland and so whilst there had a closer look at my new supertwin.

It was with much trepidation that I lifted the cover on my new toy as feared I'd had a case of 'the rose tinted glasses' when I bought her, but my fears were in vain, she's pretty tidy.

There are enough little things to fiddle with, so that will keep me happy as like to tinker when I can.

First job was to start her, but sadly the battery had gone flat. Luckily my box of tools that I posted, you can't take tools on Easyjet,even in the hold,  included a battery charger, so first job was to get to the battery and stick it on charge.

With that on charge I had time to look around and see what was what.

Noel admitted he was no mechanic, but still she was not too bad. The main thing being is she needs a good clean, and the best way to do that is with the fairing off.

Talking of the fairing, does anyone know what bike it's off? That may sound like a daft question but SV650's tend to use other race fairings on them. If you do know what it came off I'd appreciate it if you could let me know please?

With the fairing off I could see everything was where it should be and that there are just a few bits which I want to tidy up. The wiring loom is complete so will take out any spare wires, that way if you have a problem you don't have to fight your way through lots of wires that don't do anything to get to the ones that you need. I also like good bolts with not too many different types, just so it's easier to take things apart in a rush if needs be, you don't want to have to use 6 different spanners to take something apart if you have matching bolts which means you only need 3 to do the job.

I bought a few bits over with me so that I can make new spacers, footpegs etc ready to take back with me when I go over next.

I was going to bring the wiring loom back but thought better of trying to explain it at airport security, I had enough problems bringing back what I did, fingers crossed I don't get any problems on my return.

So anyway below are a couple of pictures of the bike as I left her, a bit different than the pictures in the previous photo's I posted of her. 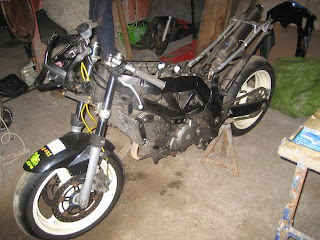 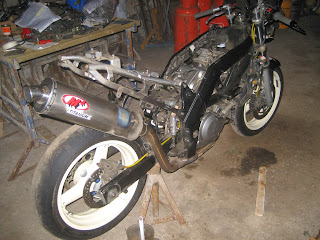 As you can see the exhaust can has taken a bit of a battering at some point and really this is the worst part of it, and even that's not too big a job to fix.

Between now and the next time I go over I've got some spacers, crash bungs and footpegs to make. I'm also waiting for various bolts to arrive, so still plenty to do.

Until the next time